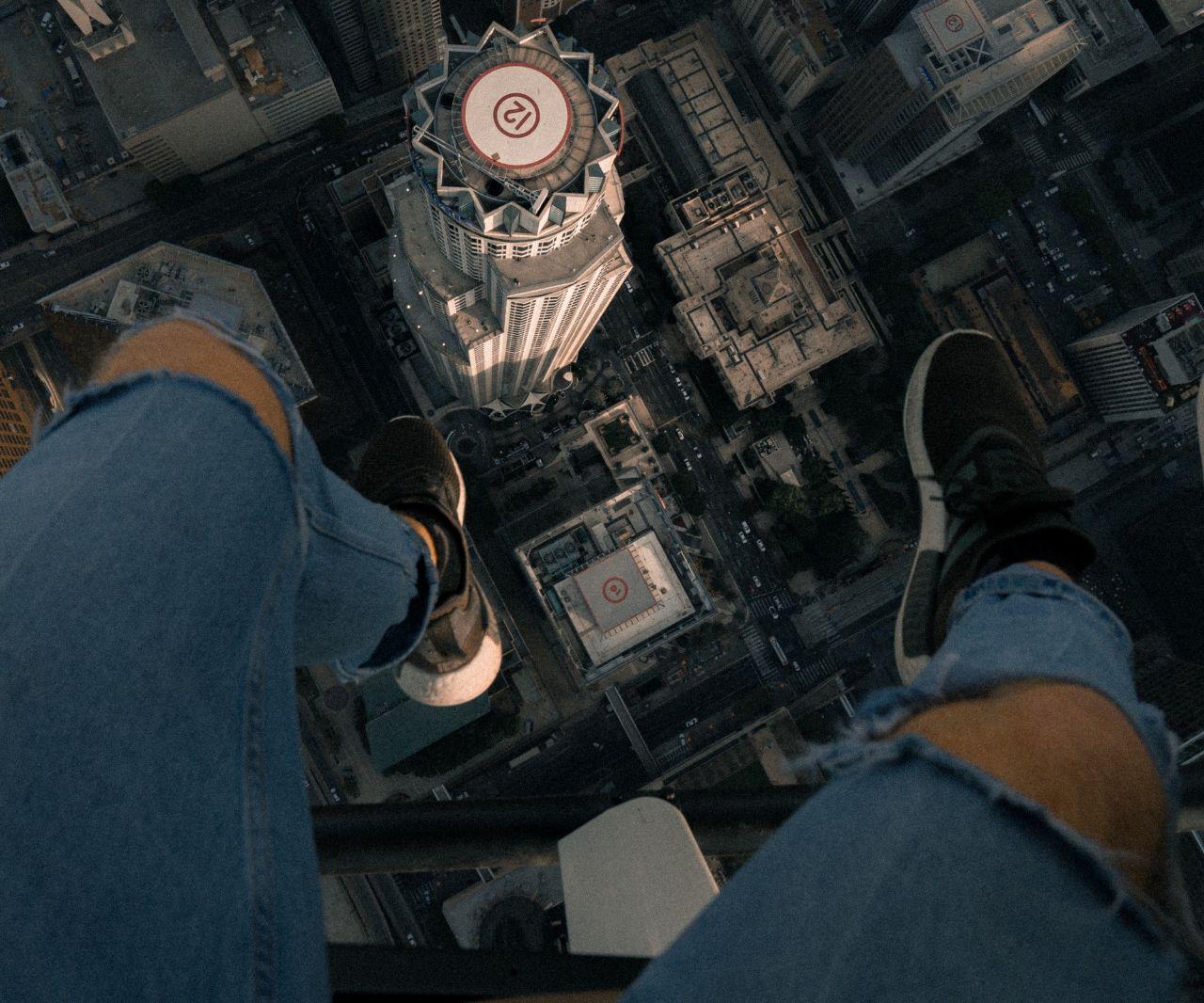 Photo by Jakob Owens on Unsplash

She places her left foot on the raised ridge, toes peeking just over the edge of the building. A surge of dread tears through her veins after an experimental look at the alley below, and she clenches her eyes shut in an attempt to smother the panic.

She’s seconds from self‐slaughter, and the last—only—thing holding her back is her fear of heights. That’s… pathetic.

Alright. She can do this. Just a few seconds, that’s all it takes. Count from five—no, three; too much time and she’ll get indecisive.

The decision’s been made for a while.

It takes longer than a second for the next count to come, but she pretends otherwise to save face. She raises her right foot, stands on the ledge wholly, and ignores the increased intensity of her inhibitions. You had your chance, survival instinct.

Exhale. Some of the resistance leaves with her breath.

She startles at the voice with a small, strangled cry, and an absurd irritation floods her as she realises the interruption almost caused her to fall off. Not that she wasn’t going to jump to begin with, but not—it wasn’t going to be so indignant. For some reason, the distinction matters to her.

Her head whips around, but the source of the offending cry has already raised his hands in a show of contrition.

“Hey. Hey, I’m sorry. Not for stopping you, I mean, but…” He trails off, at a loss for works, and doesn’t say anything else. She struggles to find something to say. They stare.

“… Could you—could you leave?” she asks.

“… Why?” Why? “What do you mean, why? I’m trying to…” She swallows, somehow unable to say it, hating how quiet the words get by the end. It rings wrong.

“Right. I mean, I can see that”, he says, in the same tone of voice one uses to chastise a child for chewing their fingernails. “But I’m not going to let you do that.”

She gapes, and has to fight back the urge to fidget. “Not going to—not going to let me? Who the fuck are you?”

“That’s not what I fucking—listen. Can you just… let me be? For fifteen minutes? I’m sorry if I chose, I don’t know, the building where you work, or something, but you’re…” She straightens herself as tall as she can and forces her tone to be resolute. “You’re not going to change my mind.”

His face pinches. “What kind of a request is that? ‘Oi, just give me a moment’, like you’re going out for a morning stroll, not trying to fling yourself off a building. I can’t very well leave now, can I?” He holds his arm up, and she notices the brown lunch bag he’s holding for the first time in this conversation. “Guilt does dreadful things to digestion. Selfish, is what it is.”

The sheer audacity takes her aback for a moment, and she feels at a complete loss. It is safe to say that this was not how she pictured her life ending. Before she can string together something more coherent, she finds herself asking, for lack of a better option, “why are you eating on a rooftop, anyway?”

For the first time in the conversation, he has the courtesy to look sheepish. “Ah. Right. Not a habit of mine, but I—” He shakes his head as if to clear it. “No, no deflecting! This is not about me.”

She starts to walk away, but—

“Have lunch with me.”

“I brought enough for two, I s’pose. I mean, as long as you’re not very hungry.”

“I, uh, but—you’re not worried…” She makes a vague gesture behind her, at the cold, hard alley below. “You don’t think I might be a little… crazy?”

A few seconds pass before it occurs to her that he’s not going to add to that sentence. She shrugs, helpless; she considers saying something along the lines of ‘what do I have to lose?’, but decides not to when she realises that that particular point is sufficiently demonstrated.

He walks up and sits down on the ledge beside her, and she follows suit after a beat. He pulls out a turkey sub and a plastic knife, and cuts it down the middle; by the end, it has less food than an average lunch, but it could get someone through a workday. He pulls out a single can of cherry cola, and pauses.

“Er, don’t mind sharing, yeah?” She shakes her head, and he pops it open, offering it to her with an exaggerated flourish. A smile forces its way through her lips before she can offer up proper resistance.

They eat quietly for a bit. For her part, she’s too—uncomfortable isn’t the right word—confounded to initiate any proper conversation. For his, he simply seems content, if a bit lost in thought, as though this entire sequence of events is little more than an interesting aside to his day.

When the silence starts to suffocate her senses, she decides to try asking an earlier question once more. “So, why do you eat lunch up here?”

That same disquiet flashes its way across his face, and she cannot help but find it satisfying, cruel as that thought might be. She can’t be the only one a bit out‐of‐control, right now. She simply cannot. His mouth opens and closes a few times.

“I don’t remember you saying that, actually.”

He scowls at her. “Semantics, innit? I’ve said it now.”

He looks out to the distance; it is only midday, and their rooftop rests right in the middle of the city, so the view is less ‘dramatic sunset dignifying the horizon’ and more ‘morass of muted steel’, and yet he manages to imbue the act with some measure of gravitas. She can’t help the mental image of him practicing that look for hours, and has to fight back a laugh.

“I wanted it to be special.”

“I work here. I was off, the entire week. Medical leave. Just got back.”

“… Oh.” She looks away, suddenly unable to meet his eyes.

“Mm. I wanted my last meal to be—fuckin’ poetic, or something. I don’t know. It’s dumb, probably.”

Her eyes shoot back to his in alarm. “Wait. ‘Last?’ If it’s that serious, why aren’t you in a hospital or something?”

A look of confusion morphs into one of horror, and she sounds humiliatingly high‐pitched when she asks, “you were going to—”

“Oh, now you’re all for self‐preservation!” he interrupts. “So happy to fling yourself off of tall things, but when a single dead man wants to do it, you act like it’s the worst decision in the world!”

Her mouth hangs open even as she flounders for a response, feeling heat spread across her face for reasons she refuses to acknowledge to herself. “You can’t just—you have time left, surely?”

“… I’m…” She bites the inside of her cheek, hard, because she refuses to let herself get teary‐eyed right now. Fuck.

“I… don’t want to die.” He laughs, and then startles, as if the words surprise him. “I mean, right? Who wants to—uh, poor choice of words, sorry. But I’m not going to die in a hospital bed. I just… I’m not. I can’t.” His eyes drift away, settling on some unfocused spot in the distance. “You know what I do here? I’m a web designer. I’m a web designer.” He laughs, harder. “I’m not even good at it! I have no idea what the fuck I’m doing. I just get paid whenever I manage not to completely mess my company’s shit up. For fourteen years, I’ve been paid to sit down, shut up, and help the bottom line.”

“I’m… sure you’re better than you think you are.”

“No. Misery. Not their own, and not immediately, but it’s to make as many people as possible fucking miserable when they die. We measure the worth of an entire lifespan by how many people get their lives crushed by grief when they read that headline, or get that phone call. That’s what we all want. You’re here because you think you’ve failed at something, right?”

“Yeah, but what in it? What specifically? What do you want to do? Or wanted, I guess.”

“Hey! That’s plagiarism. That’s breaking, like, the first rule of being a writer. But why? You wanted to be famous, right? Wanted everyone to read what you wrote, read your books. You wanted to touch them, emotionally. You wanted to be remembered—to make sure that as many everyones as possible remembered you after you were gone. You wanted to destroy them as people, just for one week, when they saw that tweet in their timeline.

“No one would be sad if I died. And yes, I am sure of that. Not really. Not beyond dehumanizing me as a ‘nice guy who never had anything bad to say’ above a casket, like I was a walking Hallmark greeting card, equally as forgettable and trite. I’m not going to fade away in a nice, clean hospital bed, in a silent, empty room, surrounded by nurses and that particular kind of feigned caring you only get when you pay someone to do it.”

He looks away and clears his throat to cover runaway tears; he’s not looking at her, so he startles slightly when he feels her lay an unsteady hand on his arm a second later.

He shakes his head. “You don’t even know my name.”

“But I would,” she says, and it shocks them both to hear the hard edge in her voice. “And I’ll be there with you. I promise. I’ll sit next to you, when you…”

“Well, if you have go and be selfish about it, yeah.”

A genuine smile, even if small. “That’s the most romantic thing anyone’s ever said to me.”

She shakes her head in false disgust. “Chauvinist.”

“You’re assuming I’m not going to finish what I started and go take a dive anyway.”

“Of course not. Because I’m not going to let you do that.”

“… I deserved that. Also, plagiarist.”